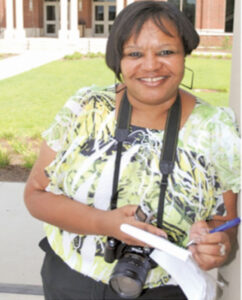 A celebration of life service for Linda G. Green, 54, was held Saturday, February 1, 2020 at 12 p.m. at Brinson Hill Missionary Baptist Church of Wadley with Reverend Bennie Brinson presiding. Interment followed at Green Cemetery. She passed away January 27, 2020 at Doctors Hospital of Augusta.

Miss Linda G. Green was born the first of four children to Doris Green and the late James E. Green Jr. on June 22, 1965 in Emanuel County. At an early age, Green accepted Christ. She joined Piney Grove Missionary Baptist Church, where she was an usher and member of the Sunbeam and Youth Choirs. She enjoyed singing and serving in any capacity where needed. She was a member of the 1983 graduating class of Swainsboro High School. Later, she matriculated at Fort Valley State College, where she received a B.S. in mass communication.

She was an avid reader of novels and absolutely loved to come home to Cross-Green Community during the holidays to spend time with her immediate and extended family.

Jogresan Mortuary Inc. of Wadley was in charge of arrangements.