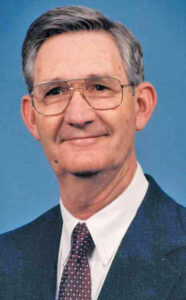 A native of Adrian, Mr. Foskey was born September 4, 1933 to Elmer and Wilma Kitchens Foskey. He grew up in Adrian, graduating from Adrian High School in 1950. On December 12, 1954, he married Mary Carroll of Wrightsville. The couple recently celebrated the 65th anniversary of their marriage.

Funeral services will be held January 14, 2020 at 2 p.m. at Peebles-Curry Memorial Chapel with Rev. Jim Harrell officiating. Interment followed at Swainsboro City Cemetery. The family received friends at the funeral home Tuesday, January 14, 2020 from 12:30 to 1:30 p.m.

Foskey began his work career in 1951 when he was employed by J. M. Wammock at his store in Adrian. In 1953, he moved to Swainsboro to work at Wammock Hardware, becoming manager in 1954. He bought into the business in 1956 and opened Wammock Furniture Company in 1962, where he remained until his retirement in 1991. Following his retirement from the furniture business, he was employed by Handi-House Financial for 13 years.

Active in his community, Foskey made his church and his family the center of his life. An active member of Swainsboro First United Methodist Church, he served as a Sunday school teacher, Sunday school superintendent, member and vice chairman of the administrative board, chairman of the Gifts & Memorial Committee, and member of the board of trustees. Foskey was a member of the Gordon Fountain Sunday School Class.

He was one of several founders of David Emanuel Academy in Stillmore, where he was a charter member of the school’s board of trustees. He served as secretary of the board and chairman of the board from 1974 to 1977.

He was also a member of the Swainsboro Exchange Club, serving as its secretary for many years and as president in 1961 to 1962.

Foskey was the longest serving member of the board of the Swainsboro Housing Authority, where he served for 44 years and served as its board chairman for more than 25 years. He was recently recognized upon his retirement in December 2019.

He was preceded in death by his parents and his beloved daughter, Jan Foskey Hemphill.

Survivors include his wife of 65 years, Mary Foskey of Swainsboro; his son, Jerry Foskey (Kim) of Lake Oconee; his sisters, Cuba Foskey Wilson (Jim) of Sylvania and Judy Foskey Davis of Swainsboro; his son-in-law, Jim Hemphill of Evans; his sister-in-law, Hazel Carroll Rachels of Wrightsville; his grandchildren, Walt Foskey (Caitlin) of Birmingham, Alabama, Elizabeth Hemphill of Evans, Hope Foskey Davis (Taylor) of Vestavia Hills, Alabama, and Wes Foskey of Lake Oconee; and a number of nieces, nephews, and extended family.

Durden-Hudson Funeral Directors was in charge of the arrangements.