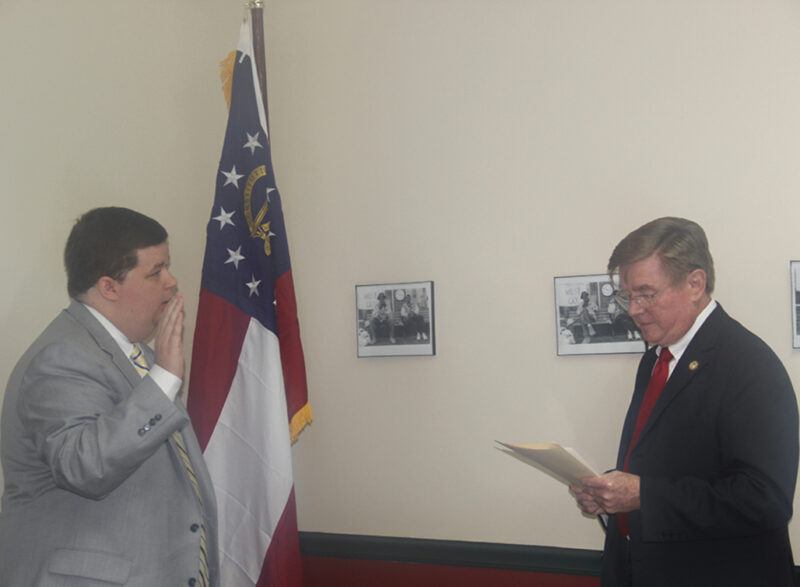 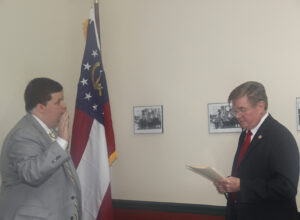 The personnel changes to the Twin City City Commission since the November 2019 election formally went into effect last Tuesday night as the body of government kicked off the first meeting of the new year with a swearing-in ceremony. Emanuel County Probate Judge Don Wilkes gave the oaths of office to two incumbents who retained their seats, Mayor Matt Donaldson and long-time commissioner Jesse Brown, and two newcomers, commissioners Kenton Landon and Charles Moody.

TCPD collaborated with animal control in 2019 and removed some 97 dogs from the city limits. The plan is to continue that collaborative effort in 2020. In addition, the police department solved a number of felony crimes. Three of those crimes ended with federal indictments. Chief Beach commended officer Marcus Hartwell’s efforts specifically as they relate to DUI offenses, and he mentioned that four high-speed chases in 2019 were conducted safely without injuries or accidents. One TCPD investigation ended successfully with the prosecution of an adult student in possession of a handgun on the grounds of Emanuel County Institute, and the department has worked to address the lack of a records management system. Now, the operations of municipal court have been streamlined and officer reporting is able to comply with open records requests in a timely fashion. Last on Chief Beach’s report to the commission was that Twin City Police Department worked close to 60 motor vehicle accidents in 2019. He also commented about the department’s work to police school traffic.

Mayor Donaldson then discussed the Emanuel County 2020 Census Resolution. “The census is vitally important,” he said. “It is how federal money is distributed to counties and cities throughout the United States. It is extremely important that Twin City is counted.”

The County of Emanuel is leading the local census effort with its Strive For 25 campaign. (The origin of that slogan is explained by Emanuel County’s previous and hopeful future census count. During the last census, the County of Emanuel was populated by approximately 23,000 individuals. The goal for this census is to show a specific percentage increase to amount to some 25,000 individuals counted.) The County of Emanuel has asked all municipalities here to pass a resolution showing support for the census efforts in the coming months. Indeed, the commission passed the resolution as requested. Brown made the motion, commissioner and mayor pro tem Jule Bady provided the second, and the vote was unanimous.

Another discussion item of interest was Twin City’s upcoming centennial anniversary, which will occur in 2021. Mayor Donaldson asked the commission to start thinking of citizens who might want to serve on a committee that will plan celebratory events to honor Twin City’s chartering in 1921.

The mayor also briefly discussed the timber proceeds from Carilee Coleman Park and Pop Boogie Recreation Complex. With harvesting complete, the Carilee Coleman Park yielded approximately $12,000 in proceeds while the ball field brought in around $15,000. These funds must be circled back into the respective parks in the future, and Mayor Donaldson called each commissioner to begin brainstorming specific uses for the funds.

The commission then reviewed a rezoning application by J. Marcus Allen for Parcel T09-022 from residential to business. No action was required at the time. The Planning Commission will hear the request in approximately two weeks and return a recommendation to the commission afterward.

In other news, Mayor Donaldson presented the ownership percentage and costs for the sidewalk project involving Twin City Drug Company. He also stated that Bady and city clerk Constance Hughes would be signers on all city bank accounts. This was made official when Bady motioned to approve a resolution to update the accounts. Landon seconded, and the motion carried unanimously.

Two citizens attended and spoke during the business meeting that followed at 7:30 p.m. Chris Stanford congratulated the newly elected officials and expressed his intent to show support, work in the community, and incorporate diversified events for Twin City. Beverly Steele congratulated the new commission as well.

Huddie Culbreth, who runs Twin City Main Street, gave a short report on the program. She stated that an effort is underway to begin the Twin City Merchants Association. She also thanked everyone who participated in the Christmas parade and festivities, and she asked the commissioners as well as meeting guests to support Historic Twin City, GA, Inc.

During committee reports, Brown notified the commission that there had been complaints to the Streets & Roads/Water & Sewer Department about the New Street area. The commissioner and the mayor alike both attributed the root of the issue to be log trucks in the area due to clear-cutting of 100 acres as well as the weather.

Mayor Donaldson presented the finance report, which included the year-end fund balance of $612,111.13. He also gave the commission a year-to-date General Fund and Water and Sewer Fund revenue and expense comparison report for 2018 and 2019. He mentioned the upcoming recreation department as well; season begins this month.

The commission also approved the agenda for the meeting. The motion was approved 4–1 with Moody voting no. Also, the minutes from the regular December 3, 2019 meeting as well as the special called meeting on December 16, 2019 were approved.