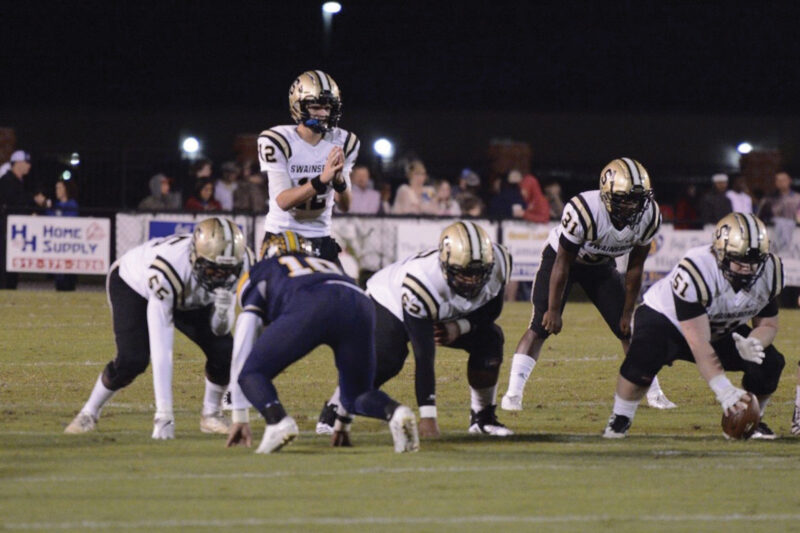 The Swainsboro Tigers (7–2) had a chance to clinch their second consecutive region championship on Friday night in Hazlehurst but instead were pushed around and frustrated by a motivated Jeff Davis team in a 21–14 loss. The No. 8 ranked Tigers still have the opportunity clinch the championship and the No. 1 seed against Toombs County this Friday night at Tiger Field.

The Yellow Jackets are a risk-taking bunch and always seem to have a special plan for Swainsboro, and this night highlighted those attributes. Jeff Davis spread their defense in a pass restrictive manner, daring the Tigers to be able to beat them by running right at them, which Vidalia and Toombs County did effectively to a combined score of 66–17 in Jeff Davis’ two region losses. Swainsboro struggled to accomplish this, driving inside their opponent’s 30-yard line but unable to get into the end zone. The Tigers didn’t score until the final minute in the first half when Kade Youmans threw a perfect a pass over coverage to Cedric Seabrough for a 28-yard TD play.

Jeff Davis ran the ball downhill on the Tigers all night, frequently for small yardage plays but enough to keep moving the chains on third or fourth down. The Yellow Jackets scored twice in the opening half for a 15–6 halftime lead.

“They played with four in the box all night long, which is a play-caller’s dream,” said head coach Scott Roberts. “You run the football at that when they’re playing 7-8 in coverage. We moved the ball, but we didn’t score enough. The passing touchdown we were able to get is because the ball was thrown in the perfect spot. You can’t ask a QB to throw to four WRs against 7-8 in coverage and expect that to be successful. If you can’t score running against four in the box, you don’t deserve to win.”