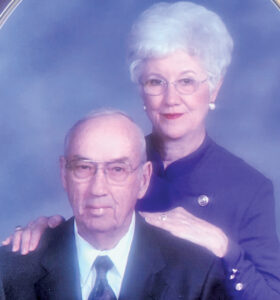 The family received friends at the church one hour prior to the service.

Honorary escorts were her caregivers.

Mrs. Simmons was born July 30, 1932 in Blundale, Emanuel County to the late Joseph Milton and Delma Anglin Lumpkin. She loved her family and friends unconditionally. Her greatest love was her husband, Herbert Eugene Simmons, and she loved to dance. Tremendously kind and gracious, she was known for her wonderful letters, notes, and cards she sent endlessly. She loved gardening, her flowers, and sharing them with others. She loved spending the holidays with her family and would cook and decorate for weeks. She managed the children’s shop at Dolores and Woody’s for more than 30 years. People would come from miles around to shop there. In addition to her parents, she was predeceased by two brothers, Joseph Milton Lumpkin Jr. and Walter Lumpkin.