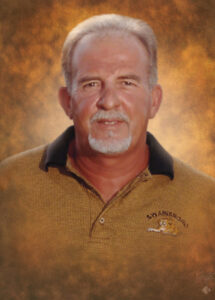 Bill was born November 19, 1953 in Swainsboro at the Smith Hospital to the late Roy Edenfield and Thelma Iris Smith Edenfield. He remained in Swainsboro until his family moved to Reidsville at the age of 3. He loved his childhood growing up on the Georgia State Prison Reservation, where he learned to hunt, fish, play sports, and made lifetime friends.

He graduated from Reidsville High School, where he participated in basketball and football. This developed his love for sports including golf, softball, basketball, and especially Georgia football.

After graduating high school, Bill served his country in the U.S. Navy. After his military career, he settled in Swainsboro and found his passion as a heavy equipment operator, which he continued working as until retirement. He was employed by Ogeechee Steel for more than 16 years.

Bill, also known as “Happy” was a devoted husband, father, papa, and uncle. He loved his family with all of his heart and was a true friend to many. He was diagnosed with liver cancer in 2016 and fought a brave, courageous battle. He was always brave, humble, and kind.

The memorial service was private.

The family requests in lieu of flowers, memorials be made to the Mayo Clinic in Jacksonville, Florida for cancer research in memory of Mr. William Roy “Bill” Edenfield.