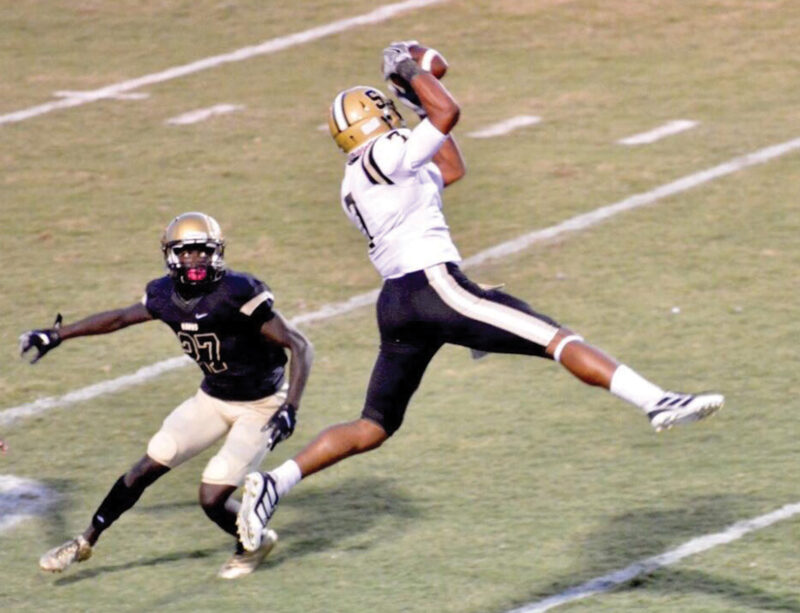 The Swainsboro Tigers avenged last season’s loss to Washington County with a resounding 27–7 victory last Friday night in the House of Pain in Sandersville. The Golden Hawks were ranked No. 6 in the state at the time and undefeated, but the Tigers took over the game defensively and all but shut down a potent Washington County squad.

Last season, Washington County came into Swainsboro and lit up the scoreboard to the tune of 47 points in their 47–45 victory. This season, the Tigers jumped all over the Golden Hawks and rarely let them up to breath with a suffocating defense that continues to show that they are championship quality.

The Tigers, now ranked No. 6 after their dominating performance, took four plays in the opening drive to find pay dirt. Quick passes from Kade Youmans to Cedric Seabrough put the Tigers in business and then a 45-yard connection with WR Quinton Pearson set up the Tigers at the 1-yard line, where Youmans did the final honors for the game’s first score. The Tigers’ defense did their job and Swainsboro was right back down at the 1-yard line late in the first quarter. Youmans pushed it in again for the TD to give Swainsboro a 13–0 lead.

Swainsboro’s third drive was highlighted by a couple of amazing throws and catches by the Tigers’ electric passing attack. Facing a third-and-8 from their own 10-yard line, Youmans found Cedric Seabrough down the sideline for an incredible twisting and turning reception that saw Seabrough reach up with one hand and tip the ball over a defender and then complete the reception for a 32-yard play. Youmans later in the drive was faced with a fourth down and 15 from Washington County’s 26-yard line. He lofted a perfect pass down the right sideline over the defender and in stride into the waiting hands of Frederick Seabrough for a huge scoring strike. Swainsboro converted a 2-point conversion and took a commanding 21–0 lead midway through the second quarter.

Washington County then had their lone scoring play of the game, breaking a 70-yard run on their next possession to close the gap to 21–7.

Swainsboro’s defense and a strong rushing effort by junior RB Robert Allen (who was sick before the game and was doubtful to even play) controlled the action from there on out. The Tigers scored once more on a fourth quarter 8-yard pass from Youmans to Frederick Seabrough to wrap up a 27–7 victory.

“It was a great playoff environment and our kids responded to it,” said head coach Scott Roberts. “First of all, we matched their toughness and physicality in every facet of the game. That is crucial to winning games like that. Offensively, we executed and protected the football better than we have all year. We had zero turnovers and our defense created some big turnovers for us. Defensively, we played with great discipline and limited big plays. We tackled in the open field better than we have all year. I give a lot of credit to Coach [Dwight] Smith, Coach [Morgan] Jersey, and Coach [Neil] David for the emphasis they have placed on becoming better tacklers the last several weeks. We said all week those things would be the keys to winning playoff type games.”

Allen rushed 18 times for 125 yards in a gutsy performance that helped the Tigers put the game away. Youmans completed 15 of 28 passes for 241 yards and 2 TDs. Cedric Seabrough caught 8 passes for 114 yards, and Frederick Seabrough caught 3 passes for 79 yards, each with a TD. Swainsboro’s defense was the deciding factor, though, with Zabrien Harden continuing a tremendous junior season at linebacker and Ka’yun Davis disrupting everything at the line of scrimmage.

“Ka’yun is doing what he has for the last few years, he’s just doing it on a more consistent basis now,” said Roberts. “What you are seeing is the way he changed his approach to the offseason and summer work. Ka’yun is one of the ones that did not let the sting of the playoff loss last year go away and realized that if we want different results, we have to prepare differently. He’s doing everything he can to make this team great in practice and it is showing up on Friday nights.”

Swainsboro enjoyed a bye week to prepare for their first region game this Friday night, October 4, in Metter.