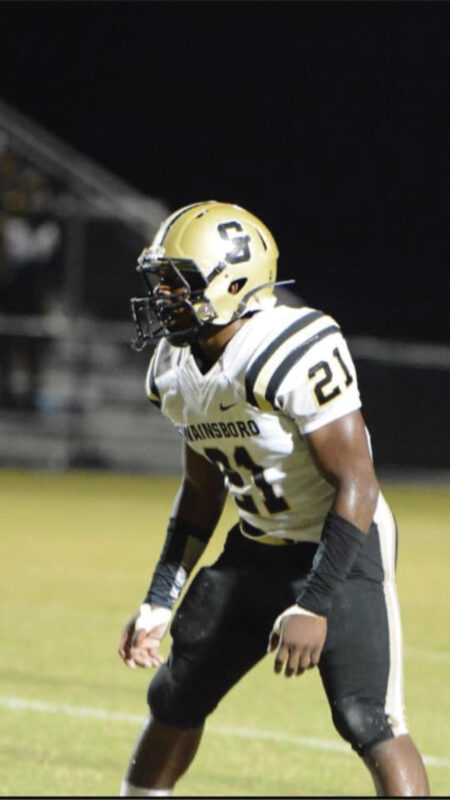 When senior linebacker John Henderson intercepted a pass in the fourth quarter of the homecoming game against Cross Creek and took it 82 yards for the score, it seemed to finally shine a spotlight on a player who has been getting it done his entire career at SHS. Henderson takes care of business consistently, bringing the wood as one of the Tigers top tacklers over the past three season and is a huge factor in Swainsboro’s dominant defense.

“I would describe myself as relentless; continual persistence and not giving up on the field!” said Henderson.

As an experienced linebacker, Henderson reads the play and tracks the ball carrier, then explodes downhill to shut down any chance at extra yardage. This senior gets it done in the weight room, too, so running backs are stopped in their tracks when Henderson gets to the scene.

“John plays fast,” said head coach Scott Roberts. “He plays with a lot of effort. He does a good job of playing assignment football and we are hoping he will continue to make plays for us as the season progresses.”

Henderson gets his adrenaline going when he or his teammates deliver a big hit. He’s scored touchdowns before as Henderson has also had experienced as a running back, but housing an 80-yard interception return was special.

“I’m most excited when I get a big hit or when one of my teammates makes a big play,” said Henderson. The defense getting turnovers always excites me.”

Henderson circles rival games in his mind that get him a little more geared up to do his thing.

“Any rival game—Jefferson County, Dublin, or Vidalia—gets me hyped. They have been rivals since childhood.”

Henderson is off to an amazing start to his senior season and as region play gets started, he’ll be ready to deliver big play after big play on the way to another region championship.