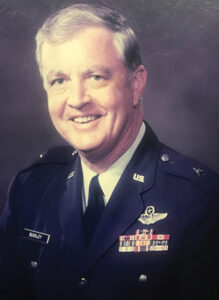 Entombment was held at Eastbrook Cemetery and Mausoleum with full military honors.

Mr. Buckley was born in Gurdon, Arkansas to the late Virginia and A.F. Buckley.

The love of his life

Mr. Buckley was married to the love of his life, Imogene Peebles Buckley, for many wonderful years. He repeated time and time again she was the best thing that ever happened to him. They had a total commitment to each other, having worked together in their architectural firm until they sold it and retired. The Buckleys also owned the Edenfield House Bed & Breakfast Inn in Swainsboro for 14 years. The inn was awarded the Business of the Month Beautification Award by the Emanuel County Clean Community Commission. Together, Mr. and Mrs. Buckley traveled all over the world and gifted themselves with two trips on the supersonic Concorde, permitting them to be in London within three hours and 15 minutes.

He graduated from Gurdon High School, serving as president of his senior class. He studied one year at Hendrix College, then transferred to the University of Arkansas, where he received his bachelor’s degree in architecture. Mr. Buckley served as president of the Arkansas Boosters Club, and he was also president of his Sigma Chi Fraternity. He was a member of Who’s Who in American Colleges and Universities and was a cadet colonel in the Air Force ROTC as well.

Mr. Buckley went on to serve three years with the Air Force before returning to Houston, Texas, where he attended Rice University and earned his master’s in architecture. (His master’s thesis on civil jet airports was published by the Rice University Publisher.)

Mr. Buckley began his architectural work in Houston with the firm of Bullock and Bullock, then moved to Swainsboro to open a branch office in 1962. His first job was the office building for Dr. Moye and Dr. Frost.

Mr. Buckley purchased the Georgia assets in 1968 and began the ownership of James W. Buckley & Associates. In 1970, he needed a secretary and as members of the same church, he asked Imogene if she would be interested in an interview for the position. She was hired. Seven years later, following their hearts, they married and lived happily ever after. This blended family included Tammy, Kathleen, Grant, Craig, and Jeff.

Mr. and Mrs. Buckley went on to open offices in Rome, Albany, and Savannah. Jim was also licensed to practice architecture in Texas, Florida, South Carolina, Tennessee, Arkansas, and Maryland. He was well-known across the state of Georgia for his educational building designs. Being a pilot, he used his private airplane for many business trips as well as pleasure travels.

Mr. Buckley was a member of the Georgia Association of the American Institute of Architects. He served on that committee for continuing education. Additionally, he served on the committee to revise state contracts. Mr. Buckley was a member of the NCARB Building Code Committee and the Governor’s Commission for the Physically Handicapped. While president of the Georgia State Board of Architects, he received the bronze medal award, which recognized his service to the profession. Mr. Buckley was a member and president of the South Atlantic Regional Council and was president of the South Georgia Chapter of the AIA. Governor Joe Frank Harris appointed Mr. Buckley to the State Board of Architects, and he served in that respect for 15 years. He was eventually invested into the College of Fellowship for the AIA. (Fellowship is the second highest honor award the AIA can bestow to any member. He was nominated for fellowship by the South Georgia Chapter of the AIA.)

In 1983, a desire for politics stirred with Mr. Buckley, and he, along with two other gentlemen, threw his hat into the ring for office of the mayor of Swainsboro. After the first election and the elimination of one opponent, Mr. Buckley and the remaining candidate had a run-off, which placed both in a dead tie of 969 votes each. The absentee votes were recounted, and the votes still remained. Swainsboro was somewhat split down the middle with voters, so Mr. Buckley and his opponent hit the streets for two weeks prior to the third election. This election drew national attention with the highest percentage of voters in Emanuel County (88 percent). Mr. Buckley won by 93 votes and served as mayor for 14 years. During his tenure, he was instrumental in the additional nine holes at the Swainsboro Golf & Country Club with Mr. Woody Nasworthy being the day-to-day supervisor for the construction. The city erected a concrete monument on the 12th green in honor of Mayor Buckley.

Mr. Buckley served twice as president of Swainsboro Rotary Club and received the President’s Award for doing so. Rotary International named him The Paul Harris Fellow as well as a Will Watt Fellow.

He was director of the following organizations as well: Emanuel Arts Council, Franklin Memorial Library, Emanuel County Chamber of Commerce, and the Swainsboro Christian Youth Center. Additionally, he was a member of the National Trust for Historic Preservation and the board for First Federal Savings & Loan of Swainsboro.

Mr. Buckley received the Build A Better Georgia Award from the State of Georgia’s Office of Commissioner of Insurance, and he was also given the Excellence in Design Award by the U.S. Department of Defense.

In addition, he chaired the Emanuel County Board of Health and co-chaired Georgians United, a coalition of small businesses, homeowners, and civic/community groups.

Mr. Buckley went on to receive the Farm/City of the Year Award from the chamber of commerce for his many years of dedication to the City of Swainsboro, and he was “roasted” by the Clean Community Commission to benefit the Swainsboro-Emanuel County Recycling Center.

Mr. Buckley was a member of First United Methodist Church of Swainsboro for more than 35 years. He served as chairman of the administrative board and the trustees. He was also church and district lay leader, and he taught Sunday school, too. Mr. Buckley was instrumental in the church getting a pipe organ. He used his airplane to fly (at that time) the choir director, John Neighbors and Helen Williams, to see the organ. They presented the information to the administrative board, who approved the purchase, and Mr. Buckley designed and supervised its installation, which was constructed by Mr. John Turner. The choir loft had to be repositioned and two pews on both sides of the sanctuary had to be removed.

Mr. Buckley was an officer in the Air National Guard for 30 years. He served as an instructor pilot (jet fighter) with the Texas Air National Guard. During the Vietnam War, he often flew transport planes that carried supplies into Saigon.

After moving to Swainsboro, he served with the Georgia Air National Guard stationed in Savannah. He was commander of the 165th Tactical Airlift Group in Savannah for five years. While commander, his unit won five outstanding unit awards.

He was then transferred to Dobbins AFB in Marietta as vice wing commander. He was state operation officer with the Georgia Air National Guard and retired from the military in 1984 as brigadier general with full military honors. General Buckley had more than 4,500 military flying hours and 30 years of service. His military accomplishments included the Meritorious Service Medal with the United States Air Force, the Vietnamese Expedition Medal, and the Dominical Republic Expedition Medal.

The Buckleys retired in 1997. At that point, they designed and built their home on Lake Oconee in Greensboro. They joined Walker United Methodist Church, where Jim served as chairman of the finance committee, the Pastor Parrish Committee, and the building committee. When the church constructed a satellite location (South Campus) on the lake, the Buckleys transferred their membership. There, Mr. Buckley served as a substitute Sunday school teacher.

Also while in Greensboro, Mr. Buckley served on the Reynolds Landing (formerly Port Armor) Advisory Committee. He also designed several buildings and homes in the area before totally retiring while living on the lake. He and Imogene enjoyed the lake for 15 years before they returned to live in Swainsboro, bought a home across the street from their daughter, Tammy, and enjoyed their move.