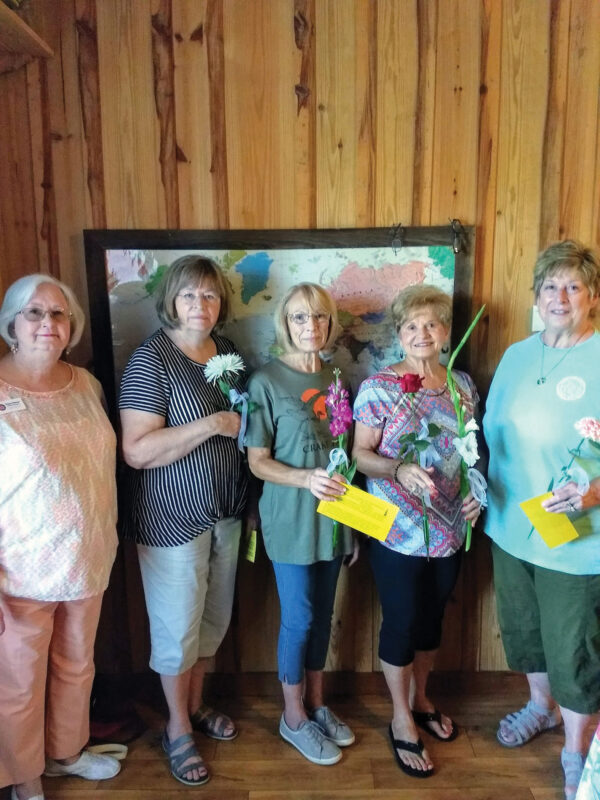 After an official summer hiatus, the Glad Garden Club resumed its monthly calendar of meetings on September 9 at the beautiful Blueberry Hill Farm of Von and Carolyn Brown.

Normally, club members would be treated to picking various varieties of grapes on location this time of year, but Mother Nature saw fit to bring dry weather and there were no grapes left this year. Nonetheless, the club would like to recognize the Browns for opening their hearts, home, and beautiful grounds for the meeting.

Malone wears many hats; in addition to being a member of the Jesup Garden Club and the Seedling Garden Club, she is the treasurer of the Wayne County Garden Club Council, second vice president of the Governor David Emanuel-Adam Brinson DAR Chapter, and member of the Georgia Salzburger Society. Because she is such a busy lady, Glad Garden Club was “truly blessed” for Malone to take the time to have fellowship with the club.

The new slate of officers sworn in were: Sylvia Durden, president; JoAnn Trammell, vice president; Carolyn Brown, recording secretary; and Margaret Sweet, treasurer. Each of these officers received a fresh flower and a Bible verse to correspond with the essence of her office. This presentation was inspired by the book “Voiceless Lips” by Neil Warren Outlaw. Brown also gave an inspirational message that referenced “The Courage to Follow Your Dreams” by Ann Pintz.

The club would like to specially recognize President Durden for also being elected to the Orleander District’s board of directors. She will serve as Roadside Beautification Chairman. President Durden headed up the Glad Garden Club’s project of landscaping and maintaining Swainsboro’s six city entrance signs.

Additionally, GGC is proud to have achieved its goal of having male participation in the club. Both Von Brown and Patrick Sweet attended.

• The handsome holly planted by GGC in front of the library has been dedicated as a memorial to Dr. Raymond Mason and Mr. Millard Shepherd.

• Members discussed historical records and the keeping, storage, and preservation of these valuable documents of the GGC beginning in 1951.

• Preliminary plans were presented for the club’s annual fundraiser to be confirmed later.

• Members were reminded to register for the Oleander District’s annual meeting at New Ebenezer Retreat Center in Rincon. Barbara Bourque, president of the Garden Club of Georgia, will be the special guest. The keynote speaker will be James Carlson. The annual meeting always features fun and special exhibits, raffles, silent auctions, a country store, and a catered lunch.

•  Malone alerted members that she is organizing a party for Oleander District members. This party will take place in February 2020 and is solely a celebration of the hard work those members have put into their projects and events.

• Members were reminded about the Jesup Tour of Homes scheduled for December.

If you enjoy plants, flowers, gardening, or even just playing in the dirt with a friendly group, GGC looks forward to you joining them. The group works hard but has fun in the meantime. Unless otherwise notified, meetings are normally held at the Sudie A. Fulford Community Learning Center on the Swainsboro campus of East Georgia State College at 10 a.m. The next meeting will be held October 14 at that location.

The Glad Garden Club is a member of the Deep South Region of the National Garden Clubs, Inc. and the Orleander District of the Garden Club of Georgia, Inc.