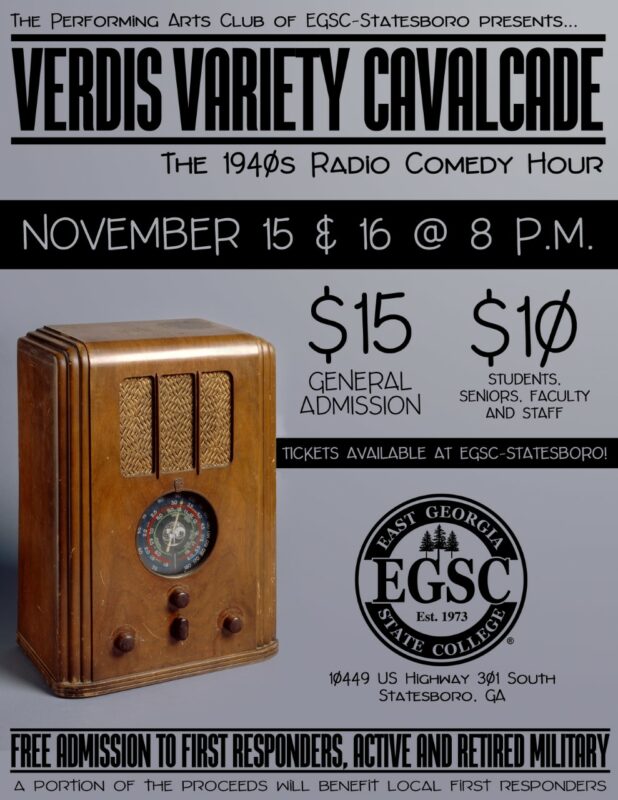 The Performing Arts Club of East Georgia State College will host the 1940’s Radio Comedy Hour in November. The performance will be held at the Statesboro campus November 15 and 16 at 8 p.m.

Attendees will take a journey with the Performing Arts Club back to the days of live radio when hundreds of personalities and programs brightened the air waves. People will enjoy a 1940’s radio comedy program the way it may have been performed before a live audience during those “War Years” from 1941 to 1945. Local celebrity guest stars from WSAV will be making an appearance in the show. Television anchor Ben Katko will be appearing in the show along with Kyle Dennis, a meteorologist.

The production is created and directed by Sebastian Verdis, an Associate Professor of Dramatic Arts at East Georgia State College.

General admission tickets for the event are $15. Student, Senior Citizen, EGSC faculty and staff tickets are $10. First responders and active and retired military get in for free.

For more information, contact Sebastian Verdis or Jessica Williamson at 912-623-2400.