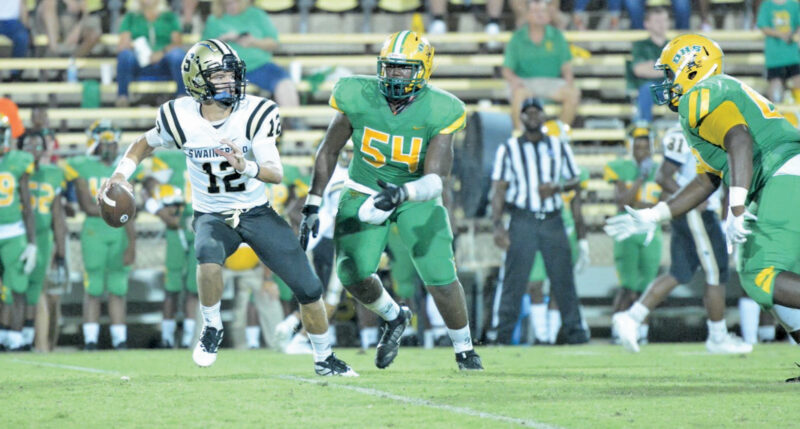 The Swainsboro Tigers traveled to Dublin to take on the Irish in a highly anticipated Top 10 match-up on Friday night but failed to measure up in a 35-13 defeat. Dublin is a non-region rival and the SECOND most played school (Vidalia is most played) in program history.

The AJC poll had Swainsboro at No. 8 and Dublin at No. 4, but only Dublin played well enough to deserve that ranking on this night. The Tigers played a good first half, though far from crisp offensively, and Robert Allen’s 41-yard touchdown run in the first quarter kept the game tight with a 14-7 Dublin lead at the half.

The second half was all Dublin as their running game began to impose their will on a normally stout Tigers’ defense. Dublin was able to get pressure repeatedly, put Swainsboro QB Kade Youmans on the move, and kept the Tigers’ explosive passing attack from stringing positive plays together. As a result, Youmans was not as accurate and struggled to get on the same page as his receivers, throwing 3 interceptions.

The Irish scored 2 touchdowns in the third quarter and one more in the fourth quarter before Swainsboro scored with 17 seconds remaining in the game as Youmans hit Cedric Seabrough for an 11-yard TD completion.

“We are certainly disappointed with the results,” said head coach Scott Roberts. “That was a huge test for us, and we failed it miserably. I thought our kids played with great effort. We did not execute, and we did not protect the football well enough to beat a team of Dublin’s caliber Friday night. When you are playing top 10 programs, the margin of error is so much smaller.”

Swainsboro fans packed out the visitor’s side of the Shamrock Bowl on this hot night and desperately wanted to have their team make the Irish pay for their taunting and brashness, but after the initial quarter, the Tigers could not keep up.

“The coaches and players are going to own this result,” said Roberts. “We are in this together, and we are going back to work this week to get better, so we respond better to those situations.”

The offensive line opened some holes for Robert Allen against Dublin’s aggressive defense, with Allen rushing 17 times for 96 yards. The passing game was absent for the most part until the game was already in hand. Youmans finished 10-22 for 124 yards with 1 TD and 3 interceptions. Seabrough caught 6 of those passes for 77 yards. Defensive lineman Ka’yun Davis stood out with explosive effort and several tackles for loss, playing with his usual ferocity.

Dublin will likely be the most talented team that Swainsboro will face until late November in the playoffs, but a measuring stick nonetheless.

“In the end, we are not what we put on Facebook, Twitter, Instagram, read about in articles, or what polls say,” commented Roberts. “We are what we put on film. That’s our resume. My expectation is that this group of kids and coaches will respond to the adversity. That is what we have been built to do.”

The Tigers will host non-region Cross Creek this week for homecoming and look to regain their footing as the region schedule looms in the near future.