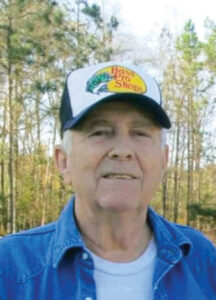 Mr. James Roy Sikes, 77, of Twin City, passed away on Wednesday morning, August 21, 2019 at University Hospital in Augusta after a brief illness.

He was born on March 29, 1942 to Mr. Robbie and Mrs. Bertie Holland Sikes in Cobbtown. In 1978, he moved back to this area from Gastonia, North Carolina. He was employed as a mechanic with Emanuel County for several years and was of the Baptist faith. In his spare time, he enjoyed fishing, spending time with his family and grandchildren, and was a small engine mechanic for his community.

He was preceded in death by his parents, wife, Evelyn Grimes Sikes, and two brothers.

Survivors include his children, Connie Flanders (Mickey) of Kite, Carol Mincey (Jack) of Twin City, and Sue Oliver (Brian) of Claxton; brother, Gary Sikes (Dianne) of Mt. Vernon; sisters, Laverne Padgett (Jesse) of Hephzibah and Reba Padgett of Augusta; five grandchildren; one great-grandchild on the way; and several nieces, nephews and other relatives.

Kennedy-Brannen Funeral Homes, Metter Chapel was in charge of arrangements.