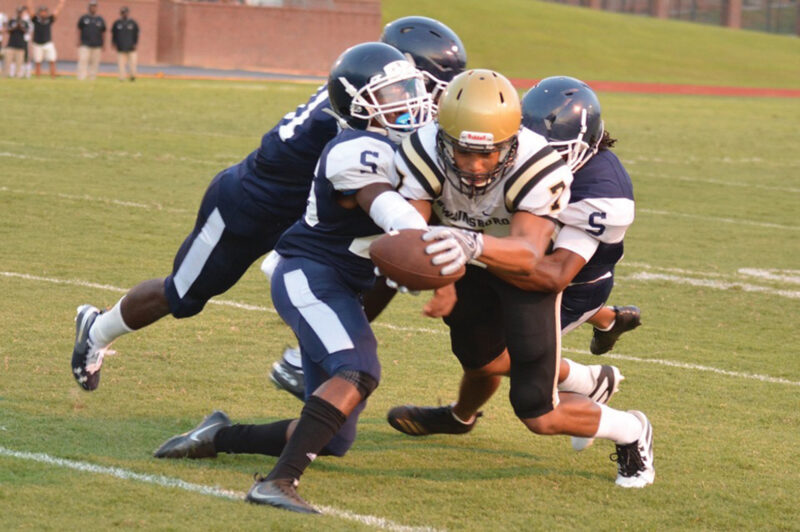 The Swainsboro Tigers varsity took to the field Friday night, taking down Statesboro 10-7 in their preseason scrimmage. The varsity played the first 3 quarters while the JV played the final period.

The practice game was a chance for players, coaches, and fans to see how this team stacked up and what to expect in the coming weeks. The Tigers certainly won the battle in the trenches, at times dominating Statesboro at the point of attack, especially defensively.

The Tigers made the first big play of the game when KJ Starnes forced a fumble at the 50-yard line. Senior QB Kade Youmans went to work, finding WR Fred Seabrough for a 30-yard completion. The drive stalled and senior kicker Cole Bell booted a 29-yard field goal to give Swainsboro a 3-0 lead with 7:41 remaining in the opening quarter.

With 9:16 to go in the half, Youmans hooked up with Cedrick Seabrough for a 14-yard touchdown completion and Swainsboro led 10-0. Two minutes later, senior cornerback Javon Brown made a great read and slipped inside of a Blue Devil WR to come up with an interception near midfield. Less than 2 minutes later, Youmans was picked off to turn it over. The Tigers would fumble and throw another late interception to end the half.

Statesboro mounted their lone scoring drive midway through the third quarter, capped off with a 31 yard TD run. Swainsboro fumbled twice more in the third period, but their potent defense maintained the lead for a 10-7 final.

“I thought we played with great effort and made some great plays on both sides of the ball,” said head coach Scott Roberts. “We have to take better care of…