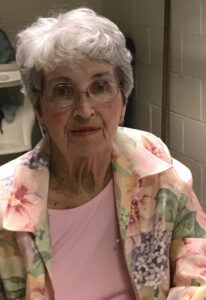 Mrs. Jackie Youmans Drake, 91, lifelong resident of Emanuel County, died Saturday morning, August 3, 2019 at Meadows Regional Medical Center. Jackie was the daughter of the late Sheriff  Peyton L. Youmans and Effie Wilkes Youmans. She attended school in Swainsboro and graduated from Swainsboro High School in 1945. She attended GSCW in Milledgeville and graduated from Drayhons Business School in Savannah. Jackie returned home and married Charles Drake on May 14, 1948. She worked as a cashier at Piggly Wiggly, then worked at First Methodist Church. Jackie also taught dancing for three years. She worked at the Citizens Bank for 13 years and worked for a while for Dr. Carter Meadows. She retired from Frank Rich Insurance Agency. She was the first president of the Swainsboro Jaycettes.

Arrangements were by Tomlinson Funeral Home and Crematory of Swainsboro.