Dr. Derden talks to SAR chapter about Treaty of Paris 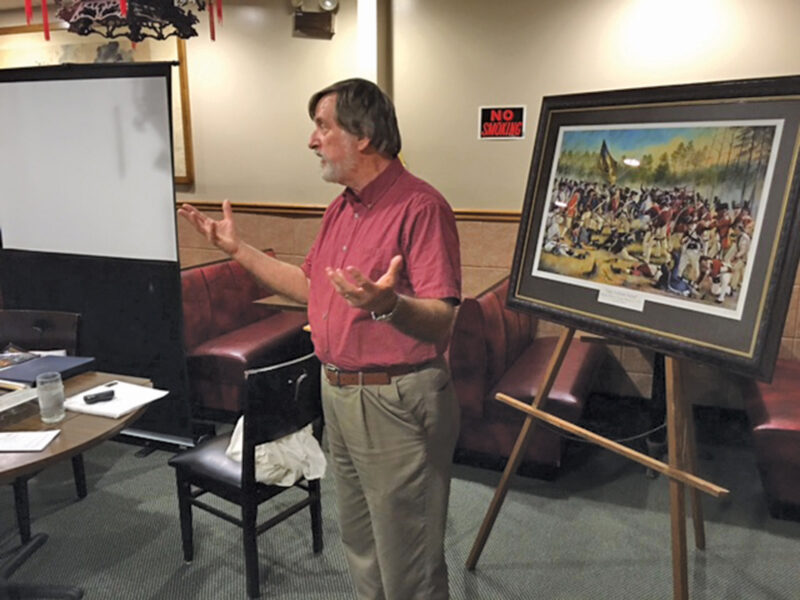 During his time with the club, Dr. Derden presented a program entitled “The 1783 Treaty of Paris,” which included an international perspective on the Revolutionary War. Dr. Derden is a former history professor who retired from East Georgia State College. Currently, he is a professor emeritus at EGSC. Dr. Derden and his wife, Carolyn, live in Swainsboro. Their son, Mark Todd Derden, and their grandson, Bryson Gage Derden, are both members of the Wiregrass Chapter. All three have John Chastain as their National Society SAR patriot. Chastain participated in Virginia patriotic service and signed the Oath of Allegiance.

Registrar Dess Smith III gave an update on applications that had been mailed to the Georgia Society as well as applications he was researching at the time.

Smith then reported on the status of the Brier Creek Revolutionary War Battlefield Association, Inc., a 501(c)3 organization.

The president, Compatriot Stephen Hammond, had informed Smith and others that the organization was officially approved March 6, 2019. In doing so, the association is tax-exempt, and donors can deduct contributions they make to it under IRC Section 170, which also makes it a public charity.

The corporation is qualified to receive tax-deductible bequests, devises, transfers, or gifts under Section 2055, 2106, or 2522. Contributions to the association will b used to help preserve the battlefield, which is located in Screven County. To make a contribution, contact Hammond at 912-659-0725 or email him at shammond@nctv.com.

To become a member of the Wiregrass Chapter, contact Smith at 478-299-1039 or email him at saussure@bellsouth.net. For more information about the chapter, visit its Facebook page.