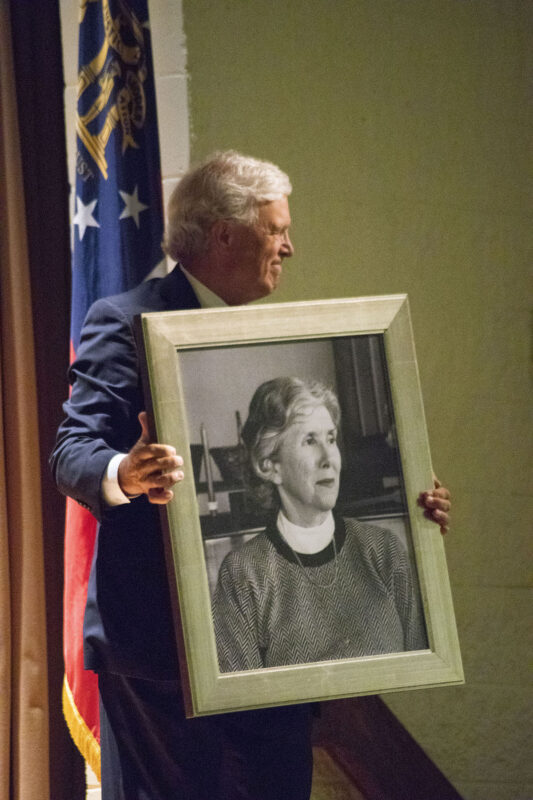 A celebration of life was held to honor the life of Jean Anderson Morgan Saturday, August 3, 2019.  The celebration was at East Georgia State College’s Luck F. Gambrell Center Auditorium. Guests enjoyed a program that included a slide show of photos from Mrs. Morgan’s life, music that she loved, and multiple guest speakers.

John Morgan, Mrs. Morgan’s stepson, presented the slideshow during the program. It had pictures of Mrs. Morgan during her travel, with her family and photos from her over 40 years in Swainsboro. Mr. Morgan spoke about her kind heart and the love she had for her husband and family.

Dr. R.H. “Bobby” Sasser was the first story teller during the program. Sasser spoke about Mrs. Morgan’s southern charm and how she loved calling Swainsboro home.

“How do you identify and describe a true southern lady? She’s a lady with a charming personality and attentive demeanor and a welcoming presence,” said Sasser. “There is no better definition of a true southern lady than Jean. Jean made you feel special. We need more Jean Anderson Morgans.”

Mrs. Morgan moved to Swainsboro after marrying her husband, Jimmy Morgan. The couple lived in Swainsboro for over 40 years. Their home is now part of East Georgia State College and is used by students, faculty and administrators for social gatherings and school events.

Mrs. Morgan had a gift for leadership. She pursued a life-long commitment to education, the arts, civic and community service. She was always generously giving her time to help others. She regularly volunteered at the Emanuel County Food Pantry, and she served on the boards of Brewton Parker College and East Georgia State College.

William C. “Bill” Rogers, the second storyteller, said it was those leadership roles that made Mrs. Morgan a great woman.

“Jean attempted to live by Christ’s teaching,” Rogers said. “She believed in helping the less fortunate. She was a beautiful lady in so many ways.”

Judge Kathy Palmer also spoke as a storyteller during the celebration of life.

“Jean touched so many directly and indirectly in our community,” Palmer said. “Jean was a mentor to me. She always spoke softly to me words of encouragement. She truly wanted to see me succeed along with many other women in our community.”

The celebration of life was held at East Georgia State College due to the college’s importance to Mrs. Morgan. She was involved with its growth, and she was chosen as the first chair of the East Georgia State College Foundation in 1974. With her help, the college was able to build the Jean Anderson Morgan Student Activities Center, affectionately known as the JAM Center.

Mrs. Morgan also established and funded The Vision Series, a series that gives the college the opportunity to bring musical events, speakers and authors to campus. This program not only benefits East Georgia State College, but the community as a whole, as the events are always free and open to the public. Harry Morgan, Mrs. Morgan’s other stepson, spoke about this during his welcome at the program.

“It was a chance for her to bring some of the outside world to the college,” said Mr. Morgan. “Her contribution to Swainsboro will be felt for lifetimes.”

Mrs. Morgan served as a board member of the Mill Creek Foundation in Swainsboro which helps citizens in the community. Her commitment to Swainsboro and its civic community activities lasted for four decades. She gave freely of her time and resources with the intention of making Swainsboro a better place to live for all.

After the program, attendees were treated to lunch. East Georgia State College would like to thank everyone who came to celebrate the life of Jean Anderson Morgan and everyone who helped organize the program.