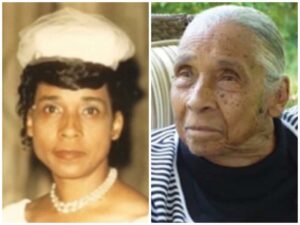 During her lifetime, Mary endured the Great Depression, and for her, her mother and father and her 16 brothers and sisters it was not just a recorded historical event, a painful day to day existence of trying to obtain food and keep a roof over their heads. The telephone, sulfa drugs, penicillin, heart transplants, World War II, she had brothers that served, the atomic bomb, steam train travel, the end Atlantic Coast Line Railway and hundreds of other rail lines that transported millions of people and farm products and machinery from small towns to large cities. When the trains stopped small towns like Stillmore and Wadley died.

Jet air travel. The demise of Pan American and Transworld Airlines. She listened to the radio as Gabriel Heater announced the news. The radio broadcast information about WW II, virtually as it happened. The transition from radio to television. The refinement of television, from black and white to color, the refrigerator, the Korean War, brothers served. The end of “Jim Crow” and “segregation”. The air raid drills, preparing us for survival of an “atomic bomb” attack. Man on the moon. The dreaded Vietnam War, two of her sons served. A nephew died as a result of his service. September 11th, 2001. The  admission of Alaska and Hawaii as our 49th and 50th states. The building of Hoover Dam, George Washington Bridge. Dr. Salk’s cure of polio.

The sad end of Ringling Brothers, Barnum and Bailey Circus that provided so many children and adults such fun and laughter. The end of “Sears and Roebuck”, The advent of the “cell phone”. With it, erased all the familiar “Bell Telephone booths” in rail stations, hotel lobbies, airport terminals and theatres.

Mary and Lucius lived in Swainsboro, Georgia after their marriage. They lived briefly in Goldsboro, North Carolina. Then on to New York City, Harlem. 63 East 122nd Street. Five flights up. 5W. It was there she raised six of her seven children. It was here that Mary, even more so to us, than Florence Nightingale or Clara Barton, administered medical remedies which nursed us back to health from, mumps, measles, chicken pox, whooping cough, severe and painful ear aches, skin rashes, cuts and bruises, burns, stomachaches, and sore throats. Nothing that she couldn’t cure by dispensing BC powders, Ex-lax, Pepto Bismol, “Black Drought” or the dreaded “cod liver oil”. Mama had a dreadful fear that a child of hers would be infected with polio.

She had “Brother Bill” deliver ice, climbing five flights of stairs, before we got our first “Frigidaire”. She hung the laundry from the kitchen ceiling. It was hot in the house in summer months. Really hot. No air conditioning, no fan, yet, she ironed our clothes. We went to school and to church always neat and pressed. She was proud of us. Mama was the last smiling face we saw each morning as we left for school and the first smiling face greeting us when we came home. We loved her so.

She prayed with us when “Daddy” was sick and Dr. Bentham was called.

She kissed us each night before she sent us to bed. She taught us to say our prayers. She read Bible stories to us.

Mary’s financial methods was the impetus for the credit card and debit card. She would send one of us to Dunn’s grocery or later in the Bronx, to Julius’s, and have a running tab of purchases generated with pencil on the back of a # 10 brown paper bag. She paid her tabulated bill at the end of each week. She did some of her grocery shopping at the A&P “under the bridge”. She collected S&H Green Stamps. She loved each one of us.

Mama took us to  Sears and Roebuck, on “Fordham Road” in the Bronx, to shop for clothing and school supplies at the beginning of each school year. Mary, was the predecessor to Neiman Marcus and Saks Fifth Avenue. I had name labels of other kids in collars of the shirts and jackets I wore. They were not Hugo Boss, Calvin Klein, or Ralph Lauren. My shirts, often boasted names like Barry Weintraub, Ronnie Goldstein, Spencer Collier, or Jimmy Fields. I wore them proudly. Mama washed them by hand, pressed them and had given them to me to wear, with her love.

Mama cooked okra for us, rutabaga and fat back. We never got fat. We never went hungry. We didn’t need an exercise bike. We never were without food. Mama could cook. She was a fabulous cook. As chefs go, Julia Child, Emeril, B. Smith, couldn’t hold a candle to her. Mama’s fried chicken, spare ribs, collard greens, hominy grits were the best. Potato salad, Mama’s was the only true potato salad. Her potato salad was the “Holy Grail”. Another of Mama’s without equal, was her Vanilla Wafer pudding. And best of all, sweet potato pie. Including the licking of the mixing bowl and spoon. Absolutely without equal. I don’t want to recall what the kitchen smelled like prior to New Years. I would say in this singular case, that food preparation has no correlation with its taste, when served. Her “chittlins” were absolutely delicious. There were never enough of them. Mama prepared every meal for us. Nothing was “instant”. There was no Burger King, no McDonalds no Panera Bread. Everything was cooked at home. There was no Chinese. There was no Mexican. Not for us, then.

She watched with me as the Brooklyn Dodgers won their first and only World Series in 1955 at Ebbets Field. We went to Palisades Park. We went to Coney Island. The cotton candy was superb. We enjoyed the bumper cars and roller coaster.

The sidewalks, streets and empty “lots” were our play grounds while we lived in Harlem. It was hot during the summer months, lots of children played in front of the fire hydrant while being sprayed with cool water. Sometimes there was a horrid screeching of automobile tires that echoed off the brownstone walls and made every mother’s heart stop. Mama would visibly shudder and cringe while making an immediate headcount for each of her six children. She loved us so.

I quietly admired my mother’s beautiful features. She had radiant skin,  long, very long black hair, woven like silk. Mama wore her hair in a long braid, that was wound up into a bun. Her face was chiseled, reflective of her unmistakable Cherokee Indian heritage. Mama’s Cherokee Indian name was “Wood Spirit”.

Mama would brush our hair and ensure that we brushed our teeth before we went off to school. If we weren’t lucky enough to have “Ipana”, we used baking soda.

Mama inspired us. She was as influential in our education as was Carter Woodson, Booker T. Washington and Mary McLeod Bethune. She constantly encouraged us to excel and to do our absolute best in school. She expected us to do our absolute best in each of our endeavors. We walked to and from school, 22 East 128th Street, Public School 24, Harlem. She demanded to see our report cards. All A’s was the expectation, all A’s was the standard. We were rewarded with silver dollars. The coins were placed in a little metal bank. Mama was our mentor. So was Daddy. She encouraged us, as did Daddy.

We attended Vacation Bible School each summer at Mount Olivet Baptist Church in Harlem. Mother Morris escorted us, along with other children from the “block”.

Mama’s life was not without profound grief and excruciating pain. She lost an infant son, Anthony, just being a baby of six months. It was so sudden. It was devastating. In July 1952. Mama hugged us often.

Mama and Daddy would read the “Amsterdam News”, and the “Journal American”. She would seek out the “Forest Blade” if someone went south. If someone took the train, it was the “Silver Meteor”. If they drove “home” to Georgia, it was on highway 1, or later, the 301. We always used “high test” gas.

Mama loved her sisters. Aunt Willy. She drove a Buick. She lived in New Jersey. Mama’s best friend was Ruth. Ruth Aytes. They were virtually inseparable. They were both beautiful, absolutely gorgeous. Dorothy Dandridge would envy those two. Ruth Aytes’ son died of polio. I visited him in the hospital, while he was in an iron lung. Ruth too, died young. That was some 50 years ago.

Other sisters were Sue, Effie, Rose (Ruby’s daughter) and “Neet”. There was always laughter and joy and happiness when they were together. They were all born in Georgia, in Blundale, and grew up together. Some 16 of them. Spanning almost two decades. Some cousins were looked upon as “sisters”. They picked cotton, chopped tobacco, and pulled “fodder”. It was grueling work, “sun-up til sun-down. They had no electricity, no running water, no radio, no TV, no telephone, no car. No refrigeration. No store bought clothes. Yet, somehow found happiness. Joy in each other. They just talked. They play games they made up. They hugged each other, and loved each other. I have never, ever, known anyone with such a love for each of her siblings.

Mama was not without human frailties. She had a peculiarity, she ate “clay”. Georgia red clay. She stored it, and kept it a small canvas like satchel to maintain its freshness, taste and aroma. She coveted it. She also eat starch, Argo starch. She would “eat” these dusty little white cubes during her few quite moments. Mary would share her clay with her sisters, Lil’l Will, Ruby, Sue and Neet. Daddy went “home” to Swainsboro with some frequency and would bring back a bag of “clay” for Mama and a huge sack of “Pee-cans” for himself and shared with us.

Mary had her favorite places. She enjoyed going to the Apollo Theater, Theresa Hotel, Audubon ballroom. She often visited the restaurants on City Island with offerings of crab, lobster and shrimp. Later, she enjoyed visiting the Poconos. When she could, she would visit her then oldest sister “Fannie” in Ohio. And, most recently and lastly, just before Effie’s passing, the Grand Caesar Hotel and Fort Lauderdale.

Our brother, Seth, joined the rest of us at 3202 Fish Avenue in the Bronx. Mama, as one might expect, along with Daddy, and all of us doted on him.

Mama suffered the anguish and sleepless nights as did so many mothers whose sons went off to war. She sent two of her dear sons off to serve their country, to fight a war, in Vietnam. She anxiously awaited for their return.

When I would hear someone whisper about the arrival of the Queen Mary, and how beautiful she was, I often thought, and still know, that they were speaking of my mother, my loving mother. My caring mother. My adoring mother. My devoted mother. Our mother, Mary.

We all matured and became adults at that house at 3202 to Fish Avenue in the Bronx. Mama had to let us go. One by one. Now, we must to let her go. Home.