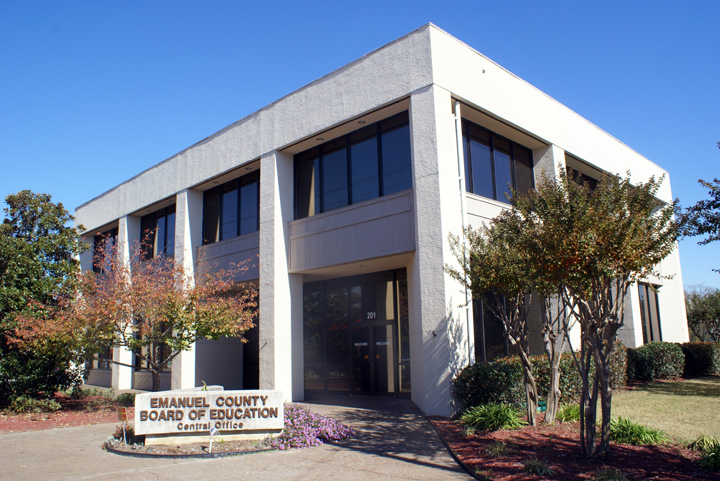 The Board of Education convened for its July 22 workshop meeting on Monday at the central office.

Dr. Kevin Judy was pleased to announce upcoming changes planned for the 2019-2020 school year and presented this information to board members using a powerpoint presentation.

Focusing on changes to be seen in office administrations, Anetria Edenfield will fill the capacity of principal at ECI, with Brooke Frye being the newly-appointed assistant principal. Robbie Warnock has taken over the role as Twin City Elementary School principal and Jessica Collins was voted to serve as TCE interim assistant principal during executive session.

Dr. Judy touched base on upcoming important dates. He stated that an orientation for new teachers would be held on Tuesday, July 23. The following day, Wednesday, July 24, a convocation is to be held in the Swainsboro High School auditorium and will feature guest speaker Dave Burgess, author of the published book, Lead Like a Pirate.

Open house hours were then discussed for the school district. With the selected date being Tuesday, July 30, primary and elementary grade levels will be held from 4 until 6 p.m. and middle and high schools will be from 4 until 7 p.m. The first day of the 2019-2020 school year will be Thursday, August 1.

Dr. Judy also addressed the board with the ECI renovation progress and stated that there is still work to be done, but he was pleased with the performed work and the predicted project outcome, and stated a meeting regarding its progress would take place the following day, July 23.

Board members were then briefed on the newly-established non-negotiables to be implemented within the system this year. Those being safety, attendance, evaluation, confidentiality, support, and honesty.

With safety being first on the list of non-negotiables, the recently purchased Centegix safety badge crisis alert system will begin use this year and Matt Braswell is scheduled to perform introductory training on this matter.

In regards to evaluation, impact checks referred to as WIG (Widely Important Goals) will be included in the upcoming school year. Focusing on school improvement, this will provide staff with the opportunity to show off their accountability and accomplishments on selective dates in October, March, and June.

In other news reported regarding evaluation, a new program entitle Navvy is currently being looked into for students enrolled in the school system. This program is said to be an alternative assessment for the State of Georgia. The current program used by Emanuel County Schools is the milestone. Setting the difference between the two programs is that the Navvy program consists of year-round testings versus the one-time deal associated with the milestone tests performed near the end of each school year. Training for the Navvy program will be held Friday, July 26, from 8:30 a.m. until 12 p.m., with plans to pilot the program during the first year. If deemed beneficial, a petition may be filed against performing milestone tests and it being replaced with Navvy. Assistant Superintendent Toni Terwilliger is preparing to present a more in-depth presentation on this matter at a later date.

Support, being on the list of non-negotialbes as well, will be obtained through the implementation of 4T. 4T is a collaboration between Emanuel County Schools, Jefferson County Schools, and Burke County School with GLISI AND SREB. The school systems were selected for this collaboration project due to the similarities of the districts. The three school systems will work together through multi-county collaboration to find the best strategies to reach higher student engagement. GLISI AND SREB will be included in by assisting the three counties reach predictive student efficiency.

Lastly discussed during the powerpoint presentation was the inclusion of long-term in school suspension (ISS) being issued this upcoming school year. As an attempt to steer away from the traditional out of school suspension (OSS), long-term ISS will be issued as an alternative measure. This program will consist of 5 to 10 days of attendance held in a separate class at the alternative school, and will be applicable for students in grades fourth through twelfth.

Chandra Hooks then presented board members with the Seamless Summer feeding program update. She reported having served a total of 4,308 meals and 375 snacks on a Monday through Thursday basis during the month of June, and also discussed finances associated with program costs. Hooks further reported a summer partnership with Weekend Blessings, who disbursed jars of peanut butter, Girl Scout cookies, and new bedsheets. Lastly, Hooks was pleased to announce upcoming fun meals to be added to the cafeteria school menus for children.

Whitney Lawrence then presented the 2019 tax digest to board members and indicated that an increase in mileage rate will be seen this year, being the first in 10 years. In order to receive fundings, a minimum milage rate of 14 is required. The current milage rate set for the Emanuel County School System is 13.657. She also advised of available grants to use to narrow tax gaps and grasp equality. Public hearings regarding this matter have been scheduled for August 12 at 11 a.m. and 6 p.m. at the central office. This item will also be discussed at the workshop meeting scheduled for August 26 at 6 p.m. at Swainsboro Primary School, with plans to adopt final submitted information at this meeting.

In reference to new business, Swainsboro High School submitted request for approval of their first fundraiser for the school year. John Allen Bailey motioned for approval, Del Brown seconded, and all voted unanimously.

Entering into executive session to discuss personnel, property, and superintendent evaluation, Bailey made first motion, John Parker seconded, and all voted accordingly. Upon re-entering regular session, the following was announced:

The Board also approved the retirement of classified personnel Donna Neal, bus driver.

The meeting was called to order by Chairman Mase Henry. Brown led in the prayer of invocation and Bailey led the pledge of allegiance. The night’s agenda was voted for adoption by Parker, seconded by Sandra Swinney, and approved by a show of all hands. The board will meet for its first August meeting on Monday, August 12, at 7 p.m. at the central office.