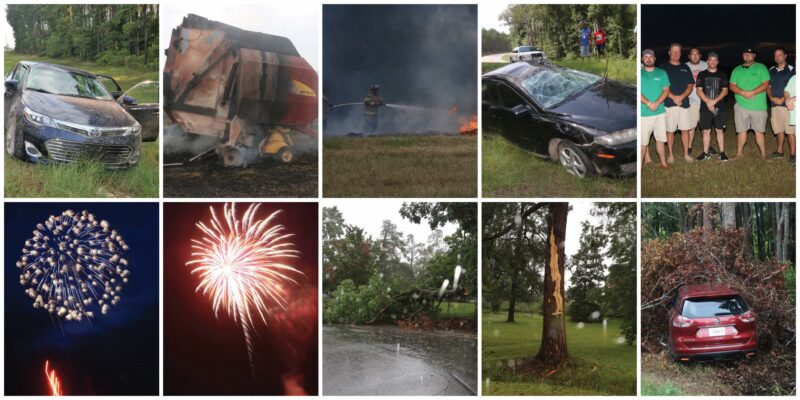 The long Fourth of July weekend started off with a single motor vehicle crash on Highway 192 South just north of Stillmore. On Wednesday, July 3, at 5:25 p.m., Emanuel County EMS, fire and rescue units from Swainsboro and Twin City, and sheriff’s deputies were dispatched to the crash scene.

First responders arriving on scene found a damaged Toyota Avalon with an injured female passenger. She was extricated from the vehicle and transported by EMS to Emanuel Medical Center with non-life threatening injuries. The female driver had lost control of the vehicle, traveled across the roadway and impacted with and leveled a power utility pole. The force of the crash-activated the airbags on the passenger side of the car. The crash was investigated by troopers from Post 19 of the Georgia State Patrol.

At 3:15 p.m. on Thursday, July 4, volunteer firefighters from Canoochee, Twin City, and Swainsboro were dispatched to 332 Almond Road for a field fire. Arriving units found approximately five acres of field burning. A New Holland Model BR7070 hay bailer and Kuhn SR110 G11 Speed-rake were damaged and numerous rolled bales of hay destroyed. A tractor crew from the Georgia Forestry Commission was called to the scene to plow a fire break as the fire had spread into a wooded area.

About an hour later…