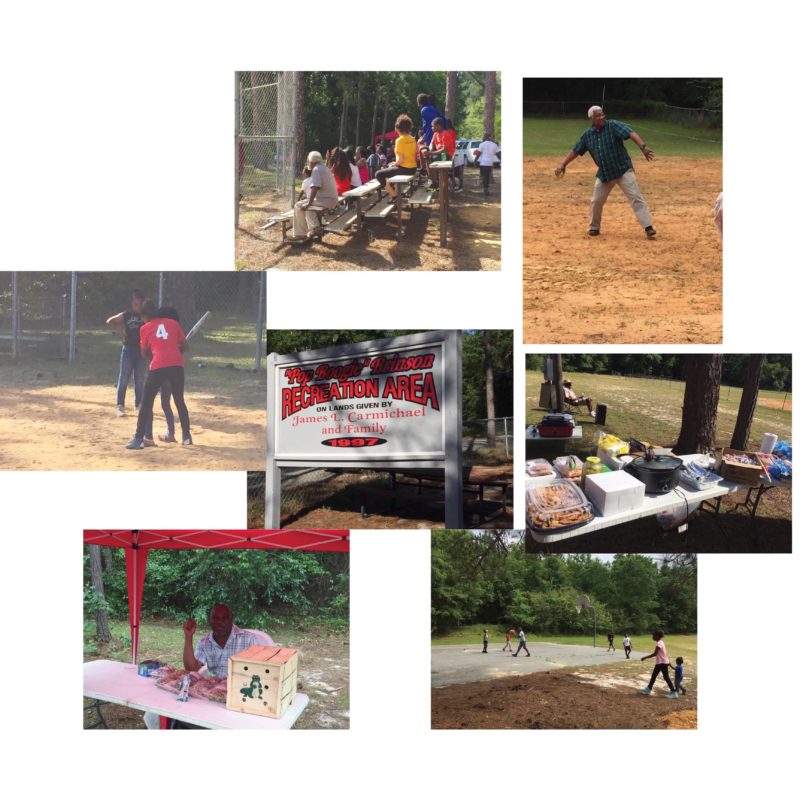 On Sunday, April 28, it was softball and Sunday dinner at “Pop Boogie” Brinson Recreational Area.  The event culminated a week of activities in Twin City to celebrate Georgia Cities Week.

The historic ball field sprang to life with softball teams made up of players from Twin City, Millen, and Swainsboro. Charles Moody organized the games, and food donated by Nathan Robertson, Gary Handsom, and others was grilled by Joseph Budget, then served up by volunteers. Historic Twin City GA, Inc. and the Twin City Main Street program provided drinks and dessert. Sunday’s games were announced by Alfonso Anderson, umpired by City Commissioner Artie Fields, and the opening pitch was thrown by Bobby Ward, grandson of “Pop Boogie” Brinson.

Pop Boogie Field is a softball field established in Twin City during the 1950s on private property belonging to the James Carmichael family. During the ‘50s and ‘60s, city softball teams throughout the region and as far away as Atlanta came to Pop Boogie Field to play competitive softball. The games, which lasted all day on Saturdays and sometimes Sunday, were well attended by everyone in the community. The games drew attendance from the county as well as surrounding areas.

Thomas “Pop Boogie” Brinson organized and coached the teams and was an inspiration to area young people. When “Pop” passed away, the Carmichael family donated the field to the city. The historic field was also significant in the 1960s, and the teams that played then were part of the Negro League. Players came from as far away as Savannah and Atlanta, and Twin City’s team was a champion within the CSRA. (In fact, one of their players, James Turner, was recruited by the Atlanta Braves.)

This spring, Twin City has re-focused efforts on refurbishing “Pop Boogie” Brinson Recreational Area, and it was great to see the enthusiastic crowd at the park. More games are scheduled, and the community is working toward rebuilding the tradition of regular weekend games and Sunday picnics. Pack a picnic and come join the fun!