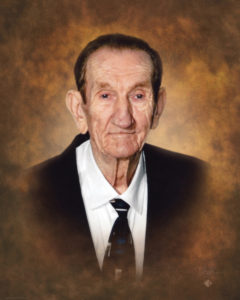 Funeral Services for George Eugene Archer Sr., 89, of Twin City will be held in the chapel of Chapman Funeral Home at 3 p.m. on Saturday, May 11, 2019 with Reverends Terry Greer and George Archer officiating. Interment will follow in Old Canoochee Primitive Baptist Church Cemetery. The family will receive friends from 6 p.m. to 8 p.m. on Friday, May 10, 2019 at Chapman Funeral Home. He passed away Wednesday, May 8, 2019 at Community Hospice in Vidalia following an extended illness.

Mr. George Eugene Archer Sr. was born December 6, 1929 in Twin City to the late Chancie Archer and Ollie Grimes Archer. He enjoyed living life to the fullest. Early on his life, he farmed for many years. As his children came along, he became an automotive mechanic and worked for many dealerships in the south. He loved fox hunting, fishing, his children, and grandchildren. Archer loved the Lord and worshipped him as his health would allow. He was a member of Stillmore Missionary Baptist Church. In addition to his parents, Archer was preceded in death by his wife, Mary Lee Hester Archer; brother, S. L. Archer; sister, Willette Archer O’Neal; and infant son; James Lee Archer.