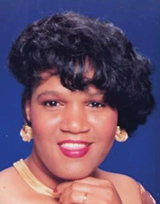 Mrs. Alberta Williams was born on April 27, 1962 in Bessemer, Alabama to the late Major Lee Miller Sr. and Christine Miller. She married her true love, Willie Lee Williams, on July 4, 1994. She was a servant of the most high Jehovah and dedicated her life in baptism on July 21, 1997. She continued as a devoted wife, mother, and grandparent. She also became a full-time minister of Jehovah.

Dudley Funeral Home of Dublin was in charge of arrangements.