; A busy night and morning for county units

A busy night and morning for county units 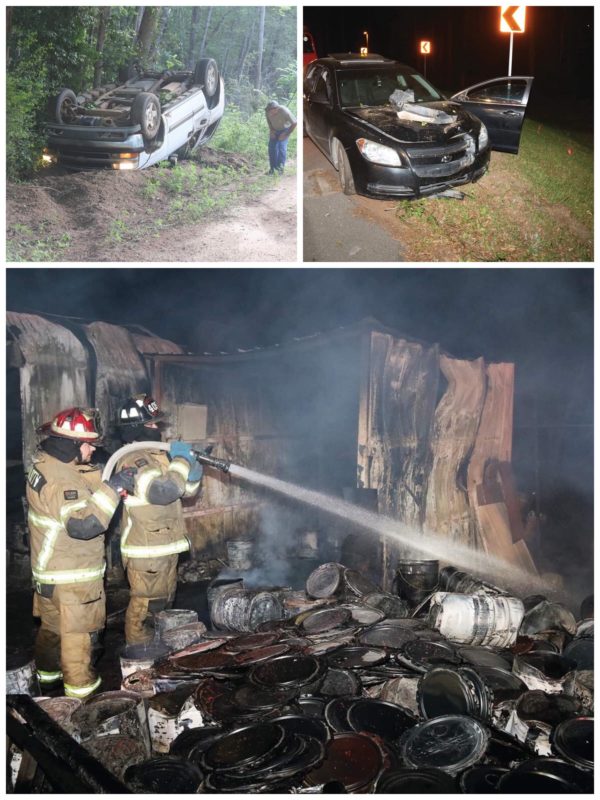 by BILL CAHILL, SFD PIO
Shortly after 10:15 p.m. on Thursday, May 8, units from Emanuel and Toombs County fire departments were dispatched to 223 Hummingbird Road in Oak Park.
A large, metal-clad structure used as a commercial paint spray booth was on fire. Additional paint and other materials store outside the structure were also burning.
Emanuel volunteer firefighters and engines from Oak Park, Swainsboro, and Twin City, assisted by Toombs County EMA, brought the blaze under control after the roof had collapsed into the building. Emanuel County EMS and Emanuel County sheriff’s deputies responded to the call. The cause of the fire is undetermined.
About an hour later at 11:17 p.m., Swainsboro Engine 3 and Rescue 1, along with EMS and Swainsboro police, responded to a 911 call for a motor vehicle crash on Thigpen Drive by East Georgia State College.
A 2011 Chevrolet Malibu failed to navigate the curve and crashed into a heavily wooded area. The occupant was checked by EMS and declined transport to the hospital. Swainsboro PD investigated the crash.
On Friday morning at 7:17 a.m., volunteers from Garfield, along with Emanuel County EMS and sheriff’s deputies, were dispatched to a motor vehicle rollover of Grey Mule Farm Road outside of Garfield.
Engine 252 arrived first on scene and reported that the vehicle was overturned in a ditch just over the county line in Jenkins County. The female occupants of a Chevrolet Tahoe were outside the vehicle with minor injuries. EMS checked and released them. The driver of the Tahoe reported she was temporarily blinded by solar glare as she rounded the curve.