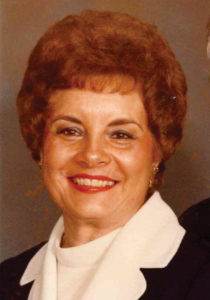 Funeral services Betty Jean Thompson, 86, of Swainsboro will be held Wednesday, August 22, 2018 at 2 p.m. at Swainsboro First Baptist Church with Rev. Paul Leigh officiating. The family will receive friends at the church one hour prior to the service. Interment will be held at Swainsboro City Cemetery. She passed away Sunday, August 19, 2018 at Emanuel Medical Center.
Mrs. Thompson was born February 27, 1932 in Adrian, Emanuel County, to the late Emmitt Eugene and Nellie Johnson Lawson. She was a native of Swainsboro and graduated from Swainsboro High School in 1949. Thompson was a graduate of The University of South Carolina with a B.S. in Business Education; she taught school in South Carolina and Georgia for 25 years, retiring from the Richmond County School System in Augusta after 20 years. While attending The University of South Carolina, she was in Who’s Who among students in American Colleges and was voted Student of the Year in 1975-76. She was a life member of the Richmond County Retired Teachers Association, a life member of the Georgia Retired Teachers Association, a member of the National Business Association, a member of the National Business Supervisor’s Association, was a Georgia Farm Bureau member, and was a member of the Emanuel County Retired Teachers Association, for which she served as treasurer for many years. Thompson was also a member of First Baptist Church of Swainsboro, a former Sunday school teacher, a member of the Trailblazers Sunday school class, a member of Happy Rover’s, and a member of the Women’s Missionary Union (WMU). She held many other offices in the Sunday school and WMU. In addition to her parents, she was preceded in death by her stepfather, Dobson Gay; a stepsister, Gwen Hughes; two brothers, Jerry Lawson Sr. and Jack Lawson; and a stepbrother, Steven Gay.