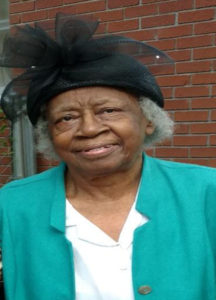 Elder Mozelle Steely was born June 4, 1930, to the late Moses and Robbie Lee Steely in Swainsboro. She was raised in Emanuel County and graduated from Emanuel County Elementary and High School. She was married to the late St. Mark Bright, and to this union, four sons were born. Elder Steely paved the way in this community, as she was the first black custodian to work at Emanuel County Hospital. She was employed by Creston Manufacturer, Southern Cleaners, and also First Methodist Church. In 2012, she received the City of Swainsboro’s Hometown Hero Award and was chosen as grand marshal for the Martin Luther King parade. Steely was a member of Stanley Grove Baptist Church during her youth. She later joined Williams Grove Holiness Church. Under the leadership of Bishop Jones, she became an ordained minister and elder. She remained a faithful member until her demise. She served in the church in many capacities, including the local and state levels of dioceses, church secretary, and president of the mother’s board and the missionary department. She served as pastor of Stillmore Sanctuary Church of the Living God for 13 years, was faithful in all her duties, and enjoyed serving the Lord. She was preceded in death by her parents, her husband, and her sister, Susie Mae Lewis.