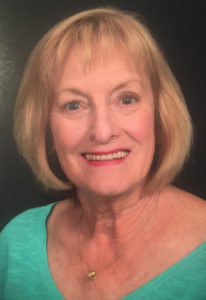 Funeral services for Jo Ann Parham Lawson, 74, were held Monday, Sept. 25, 2017, at 11 a.m. at Forsyth United Methodist Church with Darris Baker and Ken Stephens officiating. Graveside services followed at 4 p.m. at Sardis Primitive Baptist Church Cemetery. She passed away the evening of Thursday, Sept. 21, 2017, in her home surrounded by loved ones.

Ms. Jo Ann Parham Lawson was born on January 12, 1943, to Albert Parham and Blanche Lanier of Twin City. While a student at the University of Georgia, she met the love of her life, Jimmy Neal Lawson of Swainsboro. In 1963, the two were married. Upon Mr. Lawson’s graduation from the University of Georgia’s College of Pharmacy, the young couple moved to Forsyth, where they began a business and a family in the community that would become their beloved home for the next five decades. Lawson completed her education at Tift College in Forsyth and went on to teach school and coach cheerleading at Monroe Academy.

“Mama-Jo,” as she was known to her eight grandchildren, served her family and God with all the energy and care beholden to the great love she felt for both. Friends and family remember her as a woman who never rested until work was done and done well. Her home was her joy, and she found innumerable ways to brighten it and the lives of all who entered. She excelled in the art of baking, a passion she passed on to several of her granddaughters. She sang in the choir at Forsyth United Methodist Church, and her home was always full of music. Lawson loved all sports and never missed one of her children’s or grandchildren’s games. Her loyalties were particularly strong to the Georgia Bulldogs and the Mercer Bears. She was not an avid hunter, but she was the best shot in the family.

She was preceded in death by her husband, Jimmy Neal Lawson, in June of this year, and the family takes comfort in knowing that the two have been reunited in heaven. Also preceding her in death were her father, mother, and sister, Jean Williams.

Pallbearers were her nephews.

In lieu of flowers, the family would appreciate donations to the Forsyth United Methodist Church, her beloved church home of almost 50 years, or Pine Pointe Hospice of Central Georgia, 6261 Peake Rd, Macon, GA, 31210.

Monroe County Memorial Chapel was in charge of arrangements.