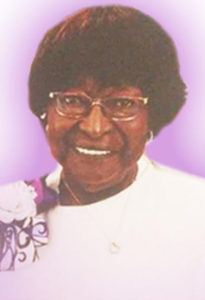 Pastor Elder Irene Coney-Wells was born in Swainsboro on May 10, 1941 to the late Agnes and Joe Coney. She was affectionately known to many for her inspiring words of encouragement, her smile, gardening, studying the Word of God and ministering to others. She was a woman of many hats. She loved and touched the lives of many, and she was a woman of dignity, valor and integrity. Wells was the state superintendent of The New Jerusalem Church of God, Inc. She was the presiding elder of Pasco, Orange and Gadson Counties. Wells was named the community pastor of Hernando and Levy Counties, and she was given “The Key to the City of Brooksville, Florida. Wells was also the backbone of the family, the pastor of New Jerusalem Church of God (Chiefland) for 38 years, New Jerusalem (Twin Lake) for 39 years, and the founder of the Noon Day Prayer Band Outreach for over 40 years. There are not enough words to describe her, “a woman of God.”

Pallbearers were her grandsons.

Carnegie Funeral Home of Chiefland, Fla. was in charge of arrangements.